There’s a bar in Oakland (which I won’t mention by name here to keep it out of the wrong ears) that has a fun tradition where the bartenders light the bar on fire when they make the last call for drinks.  It’s places like this that have shifted the tide in night life in Oakland.

Being a transplant from Los Angeles, I too went through the phase where I thought I had to go to “the city” (a.k.a San Francisco) to find down-to-earth, unpolished, almost grimy joints where unique progressive folk of all classes gather for a drink.  If that’s what you are looking for and live in or near Oakland you can join me in saying, “Forget San Francisco!”  Seriously,  its been months since I’ve felt the need to dip into the coolness of the city because Oakland IS where it’s at.   If this shot doesn’t convince you of the fact that Oakland is hot and the place to be in the Bay Area, take a walk in Uptown Oakland (on Telegraph Ave.) any given Friday Night and see for yourself.

I can’t celebrate the freshness and dynamic energy I have encountered out in Oakland nights without making a second observation lamenting the underside of the first. And that that this shot also signals another kind of last call for Oakland. For many who grew up in Oakland and the East Bay in general know that it’s been the home for communities of color who could not  afford to live in San Francisco.  Oakland’s recent renaissance has pushed large segments of communities of color out the last four years. Things are at a critical point if you appreciate property maps that illustrate neighborhood foreclosure rates.

If you happen upon this place before the buffers and homogenous modern design floods out the fun, dynamic, colorful vibe Oakland nights have to offer, look around and ask yourself whose missing as we further into the last days of Oakland as we know it.

A mini reproduction of a bust of I’m not sure whom. I thought it interesting that it was blindfolded. It makes a statement of how even the most seemingly learned can be blind by design.

The sequence depicts precarious moments in a Chinese New Year’s Lon’s Dance practice at the Oakland Museum of California. Feet suspended in the air are the frames’ focus. These youngsters acrobatics are amazing. They reflect their teachers (in the 1st and 2nd frame) discipline and attention to detail. These shots were initially published on Flickr as singles but I always knew they should be presented in sequence.

Dusk makes color and chrome render wonderfully on the grey scale.  This plymouth’s owner was glad to pose with his 1947 Oldie as he made a flaming tail pipe exit.  My goal is to catch that on camera next time. The pride these cars brings to their owners speaks to the hard work they put into a machine that becomes an extension of themselves and sometimes even capturing the identity of complete familias. Given the craftsmanship and design involved in building a lowrider its understandable how some folks may see cars as extensions of their bodies.
— JMG 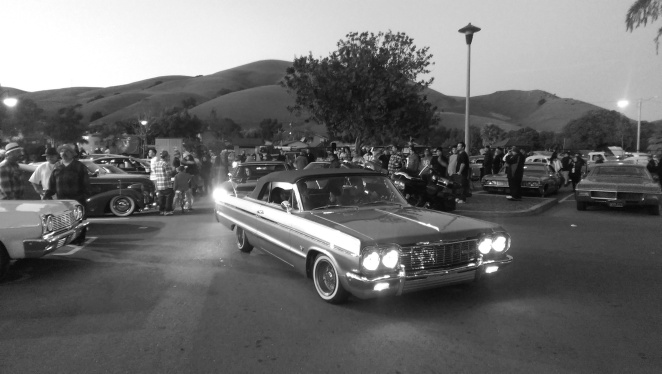 Cars, chrome, and family are what makes these events special. This shot is emblematic of the family values car culture tends to affirm. Like the family home, the family lowrider is a source of unity and pride.
–JMG

Unique threads out on Oakland nights. I noticed this young woman and could not get my eyes off her unique sense of style. I had to work up the courage to see if she would humor me when I asked if I could shoot some of her tattoos and unique top. She told me the top was hand made by her grandmother and was handed down to her recently. She was more than happy to let me shoot her with my HTC One (M8).

I wish I would have had my Nikon, but this worked good enough as I could not let the opportunity go by without a shot. Since she was happy to pose, I regret not asking her to give me a profile of her face with this pose.

Alas, on the pursuit of the aura on the street and dive bars of San Francisco Bay area.

I’m always always lamenting the fact that the Bay Area doesn’t get nearly the kind of dramatic cloud formations as in higher altitudes. But come and think of it there ARE great cloud formations around the bay but you have to know where to find them. What I call the mouth of the Bay is ideal. Especially in the summer, every evening clouds roll in across the Bay eventually meeting into the Berkeley Hills.

A Sunday walk at the Emeryville Marina was rewarded with this formation giving off dramatic light over Angel Island. It would have been great to shoot on Black and White film given how much one might be able to get out of the cloud formation in the dark room. I’m adding to my digital editing skills every day. I got enough out of the clouds her to want to share it. 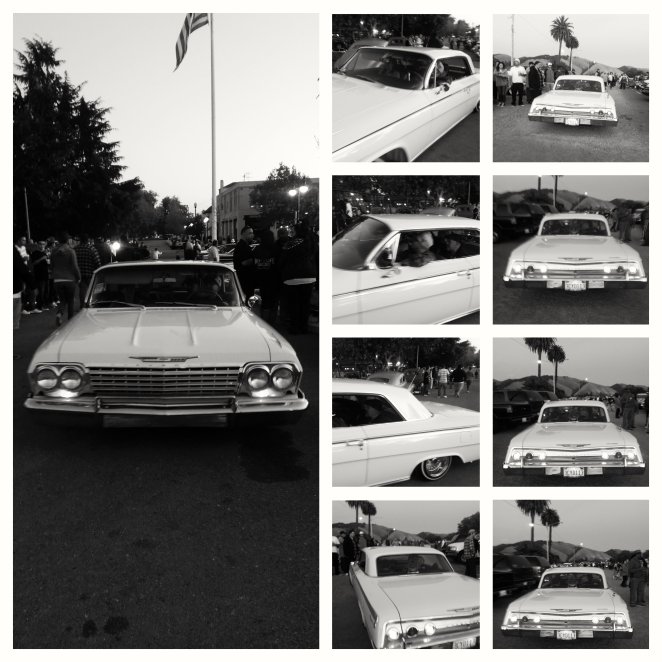 This sequence depicts an interesting ritual observed at low rider shows: the grand low and slow entrance. This Impala owner arrives at a magic hour, the time when the sun goes down and cruising into the show like a bride walking down the isle highlights the best thing of the culture. The quality time that cruising foments is often overlooked as a valuable part of this car cultura.

These boys were more than willing to pose with their new toys. The reason I find these shots interesting is the irony behind them. These boys are of indigenous ancestry, yet they “play” Indian.

I took this shot once I got home after a night of protesting the non-indictment in Ferguson. I was aiming to take some slow exposures of the police and media choppers painting the night sky but given my lack of technical knowhow in the arts of the DSLR camera, the best I could do was experiment. This frame stood out to me because the shutter was slow enough to capture the police chopper’s search light at a distance and caught the media chopper (top right) with a flat line of light, creating a nice baroque scene with a mysterious light in the background. Without context the image could be taken to depict UFOs flying over a cityscape. In the background you can make out a column of light that gives the impression that a ship pushing a tractor beam is flying overhead. Of course this all an illusion.

Beyonds illusions, this shot is interesting because it documents a pivotal moment when a new tactic of protest is born out of necessity to make space for the difference of opinion, commitment, and tactics  that this wave of protests reflect.  I have witnessed and been involved in protests for over a decade in the Bay Area and never until this wave of protests has the “splinter group” been more instrumental in both keeping the voice of indignity active and making protestors of police brutality targets of disgust for the politically apathetic.  Splintering is sort of accidental tactic that came about as a result of a recently emerging practice in the urban protesters toolbox: the take over or freeways.  The tactic emerged as the CHP and Oakland police pushed against the column of protesters that were seeking to take over freeways the days following the non-indictment decision in the Ferguson case. What was interesting about the night this frame recorded is that during the march that started the evenings calls for justice, no search lights made themselves visible until the splintering began.  The search lights followed the “volatile element,” police officials would say.

What became clear to protesters and those keeping an eye on what was going on across the city is that the police was not ready to have two, three, or four groups of protesters moving in striated patterns across Downtown Oakland, South Berkeley, and Emeryville (all freeway corridors).

The frame is also significant because it foreshadows the intense debate around whom and how should indignity be expressed after the disappointing outcomes of two police brutality cases that handed down non-indictments for the wrongful murder of two black men.  What has played out over the days and weeks following the Grand Jury decisions in both cases has been characterized by some as historical due to the scale and consistency of the protests across the U.S. that responded fervidly against the impunity of power that these cases signal.  For others more skeptical about the effectiveness of political disruptions as catalyst for change and those who dismiss such political practices as thuggish, ignorant, self-serving, and self-destructive, the recent waves of protests are reduced to nuisances that reflect immorality and unwarranted disrespect for police authority.

These attitude reflect a growing national political wedge evident as the wave of protests surge and the days and nights of protest ware on.